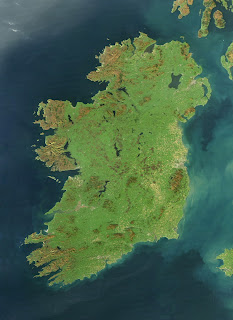 The first evidence of human presence in Ireland dates to about 12,500 years ago, shortly after the receding of the ice after the younger Dryas cold phase of the Quaternary ended around 9700 BCE, and heralds the beginning of Prehistoric Ireland, which includes the archaeological periods known as the Mesolithic, the Neolithic from about 4000 BCE, the Copper and Bronze Age from about 2300 BCE and Iron Age beginning about 600 BCE. Ireland's prehistory ends with the emergence of "protohistoric" Gaelic Ireland in the 2nd and 3rd centuries BCE.

By the late 4th century CE Catholicism had begun to gradually subsume or replace the earlier Celtic polytheism. By the end of the 6th century it had introduced writing along with a predominantly monastic Celtic Christian church, profoundly altering Irish society. Viking raids and settlement from the late 8th century CE resulted in extensive cultural interchange, as well as innovation in military and transport technology. Many of Ireland's towns were founded at this time as Viking trading posts and coinage made its first appearance.[1] Viking penetration was limited and concentrated along coasts and rivers, and ceased to be a major threat to Gaelic culture after the Battle of Clontarf in 1014. The Norman invasion in 1169 resulted again in a partial conquest of the island and marked the beginning of more than 800 years of English political and military involvement in Ireland. Initially successful, Norman gains were rolled back over succeeding centuries as a Gaelic resurgence[2] reestablished Gaelic cultural preeminence over most of the country, apart from the walled towns and the area around Dublin known as The Pale.

Reduced to the control of small pockets, the English Crown did not make another attempt to conquer the island until after the end of the Wars of the Roses. This released resources and manpower for overseas expansion, beginning in the early 16th century. Also, the European discovery of America by Christopher Columbus in 1492 meant that Ireland now occupied a position of great importance west of Britain, and therefore controlled the routes from Britain into the Atlantic, and ultimately, America. However, the nature of Ireland's decentralised political organisation into small territories (known as túatha), martial traditions, difficult terrain and climate and lack of urban infrastructure, meant that attempts to assert Crown authority were slow and expensive. Attempts to impose the new Protestant faith were also successfully resisted by both the Gaelic and Norman-Irish. The new policy fomented the rebellion of the Hiberno-Norman Earl of Kildare Silken Thomas in 1534, keen to defend his traditional autonomy and Catholicism, and marked the beginning of the prolonged Tudor conquest of Ireland lasting from 1534 to 1603. Henry VIII proclaimed himself King of Ireland in 1541 to facilitate the project. With the failure of the English Reformation, Ireland became a battleground in the wars between Catholic Counter-Reformation and Protestant Reformation Europe for control of the north Atlantic sea routes to America.

England's attempts to either conquer or assimilate both the Hiberno-Norman lordships and the Gaelic territories into the Kingdom of Ireland provided the impetus for ongoing warfare, notable examples being the 1st Desmond Rebellion, the 2nd Desmond Rebellion and the Nine Years War. This period was marked by the Crown policies of, at first, surrender and regrant, and later, plantation, involving the arrival of thousands of English and Scottish Protestant settlers, and the displacement of both the Hiberno-Normans (or Old English as they were known by then) and the native Catholic landholders. Gaelic Ireland was finally defeated at the battle of Kinsale in 1601 which marked the collapse of the Gaelic system and the beginning of Ireland's history as part of the British Empire.

During the 17th century, this division between a Protestant landholding minority and a dispossessed Catholic majority, divided not only by religion but also by cultural origin, was intensified and conflict between them was to became a recurrent theme in Irish history. Protestant domination of Ireland under a Protestant Ascendancy was reinforced after two periods of religious war, the Irish Confederate Wars in 1641-52 and the Williamite war in 1689-91. Political power thereafter rested almost exclusively in the hands of a minority Protestant Ascendancy, while Catholics and members of dissenting Protestant denominations suffered severe political and economic privations under the Penal Laws.

On 1 January 1801, in the wake of the republican United Irishmen Rebellion, the Irish Parliament was abolished and Ireland became part of a new United Kingdom of Great Britain and Ireland formed by the Acts of Union 1800. Catholics were not granted full rights until Catholic Emancipation in 1829, achieved by Daniel O’Connell. The catastrophe of the Great Famine struck Ireland in 1845 resulting in over a million deaths from starvation and disease and in a million refugees fleeing the country, mainly to America. Irish attempts to break away continued with Parnells Irish Parliamentary Party which strove from the 1880s to attain Home Rule through the parliamentary constitutional movement, eventually winning the Home Rule Act 1914, although this Act was suspended at the outbreak of World War I.

In 1916 the Easter Rising organised by the IRB and carried out by members of the Irish Volunteers, the socialist Irish Citizen Army of James Connolly and 200 women from Cumann na mBan succeeded in turning public opinion against the British establishment after the execution of the leaders by British authorities. It also eclipsed the home rule movement by bringing physical force republicanism back to the forefront of Irish politics. In 1922, after the Irish War of Independence most of Ireland seceded from the United Kingdom to become the independent Irish Free State but under the Anglo-Irish Treaty the six northeastern counties, known as Northern Ireland, remained within the United Kingdom, creating the partition of Ireland. The treaty was opposed by many; their opposition led to the outbreak of the Irish Civil War, in which pro-treaty or Free State forces proved victorious. The history of Northern Ireland has since been dominated by the division of society along sectarian faultlines and conflict between (mainly Catholic) Irish nationalists and (mainly Protestant) unionists. These divisions erupted into the Troubles in the late 1960s, after civil rights marches were met with opposition by authorities. The violence escalated after the deployment of the British Army to restore order led to clashes with nationalist communities. The violence continued for 28 years until an uneasy, but largely successful peace was finally achieved with the Good Friday Agreement in 1998.

I have some exciting news to share with everybody.  We have hired a lawyer and officially filed for a 501(c)3 non-profit status for Mandoli...

Adam Sweet provides private and group music lessons, events and music services for customers in the Pioneer Valley.
The purpose of this blog is to inform students and customers of events and articles related to topics of interest.