Irish dance dates back to its origins in Europe in the 11th and 12th centuries and became closely tied to Irish independence and cultural identity in the middle ages.  Through history, these ancient dances were never documented or recorded due to Ireland’s occupation by England, which tried to make Ireland more “English” by outlawing certain traditional practices.  Many Irish cultural traditions were banned by the English authorities during the 400-year period that came to be known as the Penal Days.

Despite this ban on cultural traditions in Ireland, Irish dancing continued behind closed doors. Because their musical instruments had been confiscated by the authorities, Irish parents taught their children the dances by tapping out rhythms with their hands and feet and making music through “lilting” (or mouth music somewhat similar to “scat singing” in jazz).  Irish dances came from Ireland’s family clans and, like tribal Native American dances in this country, were never formally choreographed or recorded.

History records a variety of dances done by the Irish in the mid-1500s. These include Rinnce Fada where two lines with partners faced each other, Irish Hey (possibly a round or figure dance), jigs (likely in a group), Trenchmores (described as a big free form country dance), and sword dances.

English suppression of Irish culture continued, exemplified by the banning of piping and the arrest of pipers. However, Queen Elizabeth I was “exceedingly pleased” with Irish tunes and country dances.

Power struggles between the Irish and English continued during the 1600s. The Penal Laws enacted in the late 1600s crushed Irish commerce and industries. The laws also banned the education of Catholic children leading to hidden (hedge) schools. Traditional Irish culture was practiced with some degree of secrecy. This period of severe repression lasted for more than a hundred years, explaining some of the initial secrecy of teaching Irish step dancing. Country dancing continued, one description being that on Sundays “in every field a fiddle and the lasses footing it till they are all of a foam”; another being “the young folk dance till the cows come home.” Dancing continued during the 1700s, often during holidays, weddings, christenings, and wakes. However, the Church sometimes condemned dancing, “In the dance are seen frenzy and woe.”

A major influence on Irish dance and Irish culture was the advent of the Dance Masters around 1750, beginning a tradition that you could argue continues today. A dance master typically traveled within a county, stopping for about six weeks in a village, staying with a hospitable family (who were honored by their selection as host). They taught Irish dancing (male teachers) in kitchens, farm outbuildings, crossroads, or hedge schools. Students would first learn the jig and reel. Sometimes, the teacher had to tie a rope around a student’s leg to distinguish right foot from left. Besides dancing, they also appear to have given instruction in fencing and other skills. Some teachers had other skilled trades that were used on occasion by the villagers, helping to explain dance masters habit of traveling from town to town. Having an eminent dance master associated with your village was a cause for pride and boasting by the community.

Each dance master had a repertoire of dance steps and he created new steps over time. (Eight measures or bars of music are called a “step,” hence the term step dancing.) Sometimes the masters danced competitively at feisianna, the winner being the one who knew the most steps, not the one with the best execution. The loser of a competition might have to concede a town in his territory to the winner. These men were the creators of the set and ceili dances and they carefully guarded their art of step creation. Dance masters created the first schools of dancing, the best known being from Counties Kerry, Cork, and Limerick. One dance master described himself as “an artificial rhythmical walker” and “instructor of youth in the Terpsichorean art.” Villagers paid dance masters at the end of the third week of teaching at a “benefit night.” They paid the accompanying musician a week later. Sometimes, the dance master was both musician and dancer simultaneously! Apparently the level of pay for the dance masters was relatively high for Ireland and it included room and board. 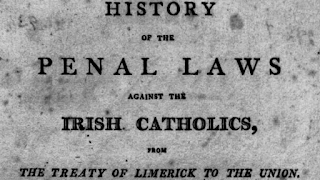 The Penal Laws were finally lifted in the late 1800’s, inspiring Irish nationalism and the Great Gaelic Revival—the resurgence of interest in Irish language, literature, history, and folklore—and its accompanying feis (essentially a gathering that included carious forms of competition).  The feis was typically held in open fields and included contests in singing, playing music, baking, and, or course, Irish dancing.

In 1929, the Irish Dancing Commission was founded (An Coimisiun le Rinci’ Gaelacha) to establish rules regarding teaching, judging, and competitions. It continues in that role. Prior to 1929, many local variations in dances, music, costumes and the rules of feisianna existed. Part of the impact of the Commission was standardization of competitions.

During the 20th Century, Irish dance has evolved in terms of locations, costumes, and dance technique.  For example, during the period of the dance masters, stages were much smaller including table tops, half doors, and sometimes the “stage” was simply a crossroad. (An old poem called dancing “tripping the sod.”) Tests of dancing ability involved dancing on the top of a barrel or on a soaped table! As stages became larger, the dance changed in at least two ways. The movement of dancers across a stage increased greatly (a judge would now subtract points if a dancer did not “use the stage”), and dance steps that require substantial space became possible (e.g., “flying jumps”). The location of competitions also changed over time from barns or outdoors where flat bed trucks were (and still are) used as stages, to predominately indoors in hotels, schools, or fairgrounds. (Note that fairgrounds are particularly appropriate in a historical context of where ancient feisianna were located.)

Irish dance has evolved in other ways during the 20th Century. Instruction is beginning at a younger age. Who is instructed has also changed from mostly males to mostly females (the turning point was before 1930). Girls dancing solos in competition were rare before the 1920s. Dance styles have also changed; for example, arms and hands were not always held rigid during solo dances. Previously they were sometimes more relaxed and were even placed on hips. It seems that the influence of parish priests led to the lack of arm movement; some argue that stiff arms were less provocative, others argue that the Church was trying to increase dancers’ self control. Hand movements still occur in figure (group) dances.

The Church opposition to dance was a European universal from the 1740s to the 1930s in Ireland in tandem with state desire for control, resulting in the 1935 Public Dance Halls Act (EDI).*

Houses and crossroads, where Irish music was played and danced, had been the main venues for social dance in Ireland prior to 1935.  These were still in "operation" well into the 1950s, especially for the American wakes.  House dances were often fundraisers, generally benefits or for the fun of it, but sometimes for political groups, and they could be held in anyone's house.  Neither they, nor cross-roads dancing could be legally controlled by the church and this of course they didn't like.  But emigration and recorded music combined with foreign dance forms (the waltz, foxtrot, twostep, shimmy-shake) were beginning to be popular in Ireland.  Private commercial dance halls were being opened to take advantage of the new fashion.  The Gaelic League was against this activity for its perceived "undermining of Irish culture".

The Church damned dances and saw them as not only improper (on the borderline of Christian modesty - Irish Catholic Directory, 1924), and "direct and unmistakable incitements to evil thoughts and evil desires".  In addition, there was concern among the authorities about the hazards of overcrowding in unsupervised premises, and even about groups like the IRA running dances to raise money for guns.  The issue became a battle for control.  Religious and political forces combined to demand licensing of dancing.  Intensely conservative lobbying was engaged in by the Church.  Under the Public Dance Halls Act (EDI) of 1935, dancing required a license, and this would only be given to people approved of by a district judge.  Failure to comply was a criminal offence.  Overzealous vigilante style enforcement of the Act by the Church destroyed social, noncommercial house dancing, and gradually shifted the social dance from private space to public.

Many argue that the Church destroyed Irish traditional music and discouraged new players.  But it also laid the groundwork for the "band", the "ceilidh band" in particular, as the mainstay of music for dancing in Ireland, opening a new chapter in Irish music History.