Origins of Dance Music in Ireland

It is likely that dance was evolved before or independently of music as we know it today.  Within historical time the melodic phrase has been the basis of European dance, not percussive beat (Subsahara).  The earliest social dances were circular and linear chain dances, dating to 1400-1200 BC in Crete/Mediterranean.  Of these, circle dances are most likely the original formal dances.  By the middle ages, the CAROLE (a circle dance) became the most popular form with two associated forms: the FARANDOLE, a line dance from the Mediterranean, and BRANLE, a circle dance from Northern parts of Europe.

In early forms of dance, the music was sung by the dancers in simple, compound double or triple time, with a regular pulse.  Performed exclusively outdoors, the dance steps were very primitive, with a leader directing the dancers in a variety of twists and turns.  This developed to use three arched figures with raised hands under which dancers passed: "Threading the needle", "L'Escargot" and "The Arches".  These fell out of popularity in the 15th century courts either because of high headdresses and pointed hats, or for religious reasons, but remained popular among rural/common dancers.  The dance then became known as HEY (hay, haye, heye or haye) with a changing of the dancers' location in relation to each other.  This pattern is reflected in part of the modern Reel.

From the French Branler: to sway, and the English: to braul, brawl.  These were circle dances.  The music had a pulse/rhythm "the branle double", an 8 bar phrase, the ballad metre, while the branle simple had a 6 bar phrase.  These and other branles became the basis of French folk dance by the 16th century and came in various styles including:

16th century French branle performed by students of Trinity Laban Conservatoire of Music and Dance.
Music by Jeremy Barlow and The Broadside Band.

In Ireland, the haye, rinnce fada and rinnce mor are three names used to refer to dance in old literature: "haye" was a chain dance, rinnce fada similar to an English country dance, rinnce mor or trenchmore, was a long dance.  In 1265 a poem on New Ross's fortifications talks of "carolling" (dancing and singing), and in 1413 dancing is described in relation to a Christmas visit by the Mayor of Waterford to the O'Driscoll seat in Co. Cork (Breathnach, 1977).  The first reference to the dance in the Irish language is 1588, when Tomas Dubh, tenth Earl of Ormond, talks of "a dance around fires by a slender, swift, vigorous company".  The Irish words for dance, "rinnce", first appears in 1609 and "damhsa", ten years later.  Descriptions of music and dance together come from 1602 at the court of Elizabeth I, where Irish tunes are mentioned: "We are at frolic here in court; much dancing in the privy chamber of Country dances before the queen's Majesty, who is exceedingly pleased therewith.  Irish tunes are at this time much liked."

Nobody knows for sure about dancing in Ireland before the 17th century.  But even though there is no official Irish word for dance (because the documentary evidence of dance is from the 17th century on), and because of its popularity depicted in Holland by painters like Peter Breughel in the 16th century (bagpipes and dance for weddings), it's a good assumption that it was practiced also in Ireland.

The original style of dancing is the solo step dance, and this is found all over Ireland.  This was taught by travelling dancing masters who were well established in the late 18th century.  They taught jig and reel steps, and also made up fancy circle dances for several couples, and "set" dances (not to be confused with sets or set-dancing), which were display dances for talented dancers.

NOTE: Solo and group step dancing have been refined in the 20th century into the costumed and choreographed kinds we see at competitions today, and in Riverdance and the Lord of the Dance.  In the competitions, dancers will be dressed in colored costumes decorated with Celtic designs, these dating to the early 20th century, their more elaborate forms originating in the USA and Australia.

The Gaelic League favored a deanglicization policy in anything culturally-related.  The banned all European circle, country and sets dances, encouraging a revival of older dances and creating new ones.  In 1939 the Coimisiun an Rinnce (Irish Dancing Commission) published instruction for the approved choreographies, "Siege of Ennis", "Walls of Limerick", "Sweets of May", etc.  Although sets were banned, they continued anyway, surviving to the present day in areas like Kerry and Clare, boosted in the 1980s by revival and in their original English (courtly) forms, they are still danced in some Orange halls in Co. Down.

The Church opposition to dance was a European universal from the 1740s to the 1930s in Ireland in tandem with state desire for control, resulting in the 1935 Public Dance Halls Act (EDI).*

Houses and crossroads, where Irish music was played and danced, had been the main venues for social dance in Ireland prior to 1935.  These were still in "operation" well into the 1950s, especially for the American wakes.  House dances were often fundraisers, generally benefits or for the fun of it, but sometimes for political groups, and they could be held in anyone's house.  Neither they, nor cross-roads dancing could be legally controlled by the church and this of course they didn't like.  But emigration and recorded music combined with foreign dance forms (the waltz, foxtrot, twostep, shimmy-shake) were beginning to be popular in Ireland.  Private commercial dance halls were being opened to take advantage of the new fashion.  The Gaelic League was against this activity for its perceived "undermining of Irish culture".

The Church damned dances and saw them as not only improper (on the borderline of Christian modesty - Irish Catholic Directory, 1924), and "direct and unmistakable incitements to evil thoughts and evil desires".  In addition, there was concern among the authorities about the hazards of overcrowding in unsupervised premises, and even about groups like the IRA running dances to raise money for guns.  The issue became a battle for control.  Religious and political forces combined to demand licensing of dancing.  Intensely conservative lobbying was engaged in by the Church.  Under the Public Dance Halls Act (EDI) of 1935, dancing required a license, and this would only be given to people approved of by a district judge.  Failure to comply was a criminal offence.  Overzealous vigilante style enforcement of the Act by the Church destroyed social, noncommercial house dancing, and gradually shifted the social dance from private space to public.

Many argue that the Church destroyed Irish traditional music and discouraged new players.  But it also laid the groundwork for the "band", the "ceilidh band" in particular, as the mainstay of music for dancing in Ireland, opening a new chapter in Irish music History.

Demands of dancing in large spaces altered the performance style of music.  It did not require solo and duet playing, it sacrificed rhythm to beat, impersonalized the musicians, prioritized the music=making over social occasion and obliged musicians to learn other forms of music (non-Irish) demanded by the modern venue.  The Accordion became important, for volume, diminishing the status of the subtlety inherent in expert fiddle playing.  Dancers were separated from the process of music-making, standards of appreciation declined, musicians lost local importance, became discouraged and many abandoned playing altogether, or switched to performing European or popular American music, which was becoming more popular in Ireland. 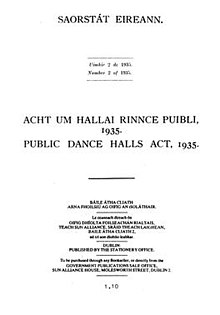 The Public Dance Halls Act 1935 (Irish: Acht Um Hallai Rinnce Puibli, 1935) is an Act of the Oireachtas which regulates dance halls in Ireland by introducing a licensing system and a tax on admission tickets.
The proposals were based on the recommendations of the 1932 report of the Carrigan Commission into juvenile sex crimes.[2] Other Carrigan Report recommendations were enacted in the Criminal Law (Amendment) Bill, which raised the age of consent and banned artificial contraception.[2][3] On dance halls, the report stated:

In the course of the Inquiry no form of abuse was blamed more persistently for pernicious consequences than the unlicensed dances held all over the country in unsuitable buildings and surroundings, for the profit of persons who are liable to no control or supervision by any authority. The scandals that are the outcome of such a situation are notorious. They have been denounced in pastorals, exposed in the Press, and condemned by clergy, judges and justices, without avail. Before us the Commissioner, speaking for the Civic Guard, said these dance gatherings in many districts were turned into "orgies of dissipation, which in the present state of legislation the police are powerless to prevent." In short, there is no effective legislation to put down this nuisance.

The Public Dance Halls Bill was introduced in 1934 by the then government of Fianna Fáil, and supported by the opposition Fine Gael and Labour parties.[4] It was supported by the Catholic hierarchy. Secular nationalist institutions like the Gaelic League the legislation were seen as beneficial for protecting Irish culture against foreign influence.

Licensing is administered at the district court, subject to the discretion of the local judge. In the early years of its effect, they were less tolerant of more recently introduced musical styles, such as set dancing(seen as "foreign") and jazz dance clubs.[6][7][8] However, it also disadvantaged many traditional Irish musical activities, such as private house dances and crossroad dances, forcing spontaneous and social music and dance into a controlled and commercialized environment. This set the conditions for the predominance of the céilidh, with its large and loud musical ensembles and wide open dance spaces.[5][9] The ceilidh arose at the expense of older traditional music, which declined in popularity for decades until the creation of the Comhaltas Ceoltóirí Éireann, and later the Folk Revival brought new attention to traditional Irish music.

The Act remains in force, with amendments.[10] Nightclubs may be subject to stricter conditions in some districts than in others, depending on the particular judge. The Irish Nightclub Industry Association has described the legislation as "archaic".[11] In 2001 there was confusion about whether the Act applied to lapdancing clubs.[12]